This week True Detective reminded us of the value of human life…. In a shootout.

Last year Nic Pizzolatto brought us a fascinating meditation on masculinity within the crime mystery genre. It was a showcase for the acting talents of both Woody Harrelson and Matthew McConaughey, while making use of the less restrictive format of a television mini-series. While HBO shows like The Sopranos and The Wire paved the way with slower-paced plots that had more time to spend on deeper characterisation and world-building than cinema, True Detective brought Hollywood actors into the fold. In season one episode four ‘Who Goes There’, Cary Fukanuga ended on an astounding six-minute tracking shot of a failed robbery and the subsequent escape. This year, also at the mid-point of the season, ‘Down Will Come’ culminated with a disastrous police raid.

While it hasn’t been made clear yet whether it was a trap, a set-up by a corrupt mayor, or simply a serious case of bad luck, our three main characters found themselves in a situation they had not anticipated. Before they could enter the building, they found themselves under fire, and a shootout commenced. Once the gunmen fled their hide-out, they crashed into a public bus, and nearby protestors were caught in the ensuing gunfire. The tense, skilfully-directed confrontation saw the capable detectives eventually put down the enemy, but finding themselves surrounded by the bodies of dozens of innocent bystanders. There was no off-the-cuff remark, no vengeful taunt to the felons, and no sense of achievement. As audiences we crave the catharsis of an action sequence, the adrenaline of a car chase or gunfight, but we are rarely confronted with the horror of a situation like this.

Films such as Funny Games and Fargo confront us with the inherent evil and futility of violence, but we still line up for blockbusters where the body count is glossed over. The push for action movies to secure the PG-13 demographic means the gore and detail of violence is stripped away, but the acts themselves remain without impact. Even the images of fleeing civilians showered with bullets may have been forgotten by most if the show had cut to a different scene immediately after the perpetrators were subdued. But True Detective makes a point of dwelling on the aftermath; these characters do not get to walk away from the massacre they were partly to blame for. Earlier scenes in the episode continued to inundate the characters with personal troubles– Velcoro has to say goodbye to his son half-hidden in the dark, Bezzerides is suspended possibly due to the influence of Mayor Chessani. While at the forefront for most of the episode’s runtime, these issues become completely insignificant at the end once the scale of destruction is truly felt. While they may be undergoing some personal trauma, all around them are lives cut tragically short. The only subplot that has any bearing on this moment of collapse is Woodrugh’s. His time in the military and the apparent post-traumatic stress it left him with is heavily hinted at, and earlier in the same episode he laments that “I just don’t know how to be out in the world”. At no point in the shootout does he lose his cool or show fear, nor does he convey any grief in its aftermath. He is in his element here, this is a world that makes sense to him. Violence may be what messed him up in the first place, but it’s also the only frame through which he can understand and deal with his life.

On the other hand, Velcoro and Bezzerides are visibly shaken up throughout the entire ordeal, and are emotionally crushed as soon as they are given the time to engage with what has happened. Cinema and television often use their protagonists as a means to communicate how the viewer should be responding to a situation – a character cries, we feel sad with them etc. Of course there are plenty of exceptions to this, or even times where we can empathize with the character’s response without sharing it, but for the most part there is a relationship between our response and theirs. If we project ourselves onto the main character, we endow them with more depth, and in turn our emotions are shaped by what we see them experience. The final shot of this episode leaves us with the sharp contrast of two detectives breaking down in tears, with Kitsch’s Woodrugh standing upright and unfazed. It’s almost as if the audience are being shown the appropriate response alongside the detrimental one narratives often enforce. 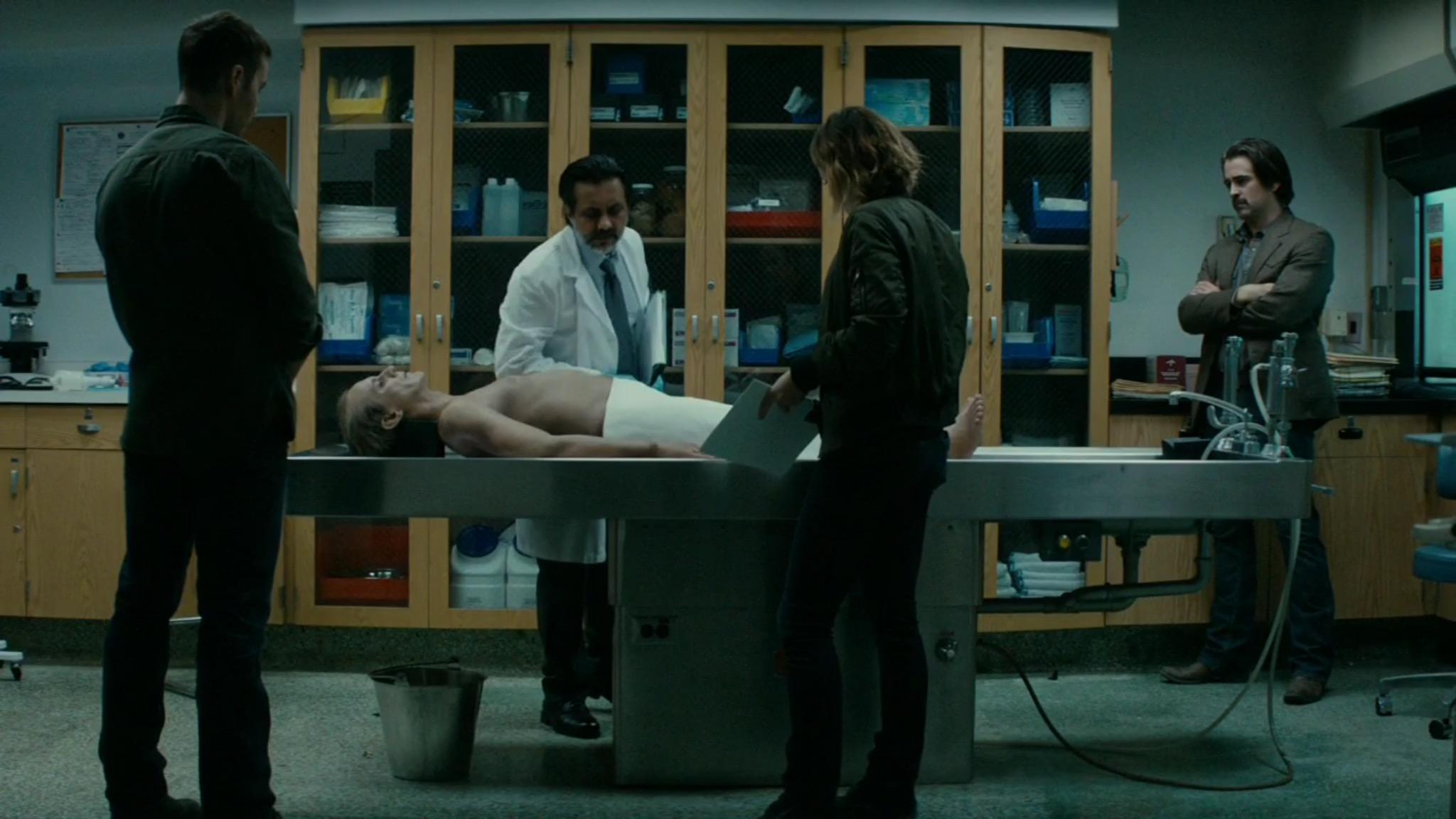 The topic of the weight of death in film and television has been discussed at length in recent years. Man of Steel inspired think-pieces when it showed a city-destroying fight where civilian casualties were side-lined, to the degree that Batman V Superman: Dawn of Justice seems to be addressing this directly. The Avengers’ final battle took the time to show us the evacuation of civilians and the attempt to minimise the affected area, while the enemies were an alien race of warriors given little backstory. Avengers: Age of Ultron doubled down on this by having the bulk of the enemies be drones under the Ultron’s control, so the violence inflicted upon them isn’t complicated. Sometimes it’s easier to side-step the issue than get caught up in controversy.

There are some examples where mainstream cinema handles this well, however. The Hunger Games series has an increasing focus on the psychological damage violence has wreaked upon Katniss, one of the few PG-13 films to effectively show the weight of the deaths on screen. The iconic image from the trailer for Dawn of the Planet of the Apes was the shot of an ape riding a horse into battle while firing an assault rifle. It was something that inspired excitement in me, but once I saw the full scene in theatres this feeling was turned on its head, the conflict was distressing to watch. The camera had the fortitude to not look away, and not let the audience have their action sequence without reminding them of its significance.

In the penultimate episode of True Detective’s first season, after only coming across the victims of abuse, we come across a videotape of the rape and murder of a little girl. Marty (Woody Harrelson) watches the old tape, but we only see its beginning. As it continues, Fukanuga’s lens conveys the horror of what he sees through his anguished reaction. For all his talk of catching the man responsible for the murdered women, it is only at this point that he is confronted with the weight of a singular act of extreme violence. While Bezzerides and Velcoro see corpses in crime scenes and morgues, they are not involved or engaging with the magnitude of death until it happens around them. When we allow murder to be defined by its rate, and violence a statistic to be filed away, we become tolerant of it. Like us, these detectives can detach themselves from the murder when the body is treated as an object, but Pizzolatto has no intention of letting us get off that easily.