“You’re just one bad day away from spending three days in bed binge-watching this show.”

Marvel is showing no sign of slowing down in its quest for multi-media domination, and the new season of Daredevil is it’s latest attempt on that front; spoiler alert, it’s more of a step back than anything, but its still very worth the watch. I’ll go light on the spoiler talk, but I’d refrain from reading on if you want to go in completely blind (no pun intended).

Let’s start with the problems I had with this season, just so we can end on a good note; for one, this season’s big bad had gigantic, clown-sized shoes to fill after Vincent D’onofrio turned in what I consider to be Marvel’s best villainous performance, and a strong contender for best performance overall, in the first season. With announcements leading up to the premiere revealing that both The Punisher and Elektra would be heavily featured in the new episodes, it seemed pretty reasonable to be optimistic that we’d get another iconic antagonist for Matt Murdock, but that’s not the case; both The Punisher and Elektra are fantastic, interesting characters, but they only toe the line of ‘big bad.’ Sure, they stand in Murdock’s way more than a few times, but they help him almost as much; so then who takes Kingpin’s place this season?

Your guess is as good as mine, because it seems to me that no one does. The leader of the Hand, an ominous organization that drives forward the main conflict of the season, would be the likely candidate, but we don’t even see him until the later half of the season, and little to no character development is thrown his way even though he’s a face we’ve seen before.

What made Season 1 such a breath of fresh air in the otherwise formulaic Marvel’s Cinematic Universe was the introduction of a truly conflicted, and engaging villain. Even though we were sure at every moment that Kingpin had nothing but pure evil in his heart, we got an inside look at what made him that way, and although I doubt anyone really got to the point of feeling sympathy for him, at least we wanted to. This season seems to have taken that moral ambiguity to heart and introduced a few new compelling anti-heroes, and although shades of gray like that are nice, sometimes we need a definitive black. Not having a concrete main villain to really draw our interests detracts from the cohesiveness of the season as a whole and left me feeling more confused than anything.

Can’t wait for this beautiful specimen of scum to go back to a regular role.

On top of that, the season’s recurring theme of “What separates a vigilante from a villain?” is one that’s addressed in every single vigilante justice story, which is perfectly fine as long as you bring something new to the table, and I’m not quite sure that Daredevil accomplished that. Sure, taking that route is the next logical progression for the series since Murdock’s actions last season definitely opened the door for other people like him, and the introduction of The Punisher lends itself well to that, but the show never seems to move past the dichotomy of “Well he murders people and I don’t!”. I don’t mean to completely downplay the points that the show makes, because Daredevil really does hit a low point this season and starts to doubt his decision to trust in the legal process, but it just all feels so hollow and routine at this point. We get it, the line between The Punisher and Daredevil is blurry at best, but I’d rather the show realize this point in a compelling way rather than badger me with it in every line.

Now, I’m going to talk about the ending, because it involves another major issue, so you’ve been warned to skip this paragraph. The decision to have Stick be the one to kill Nobu is one that I completely disagree with; Murdock threw Nobu off the roof and made no attempts to save him with the grappling hook. For all he knew, Nobu was dead and he was responsible, so keep it that way; having Matt Murdock deal with the fact that he’s done the one thing that separates him from Frank Castle is a beautiful set-up for the next season and it fits perfectly with the dour tone of the entire ending. Having Stick finish the job just takes the weight of that decision almost entirely away from Matt and turns what’s supposed to be a bittersweet climax into a bit of a joke. Also, the very last scene (with Karen, you know which one I’m talking about) feels so tacked on, its kind of obvious they filmed that just so they could end the season on a bit of a cliffhanger.

Now for what I liked, because as much as I had my gripes, I still loved a lot about this season. This show is not afraid to linger on a shot during a fight scene, and that is a preference that leads to absolutely jaw-dropping action scenes that had me gripping the edge of my bed. I can’t quite speak to the action choreography because I know nothing about fighting at all (unless you count my blue belt in karate), but the cinematography makes every fight feel breath-taking and on a greater scale than just “obligatory fight scene between Daredevil and some thugs.” What’s more is that we’re never quite convinced of Daredevil’s invulnerability; he takes some hard hits during every fight, and there are many times that we’re not quite sure if he’ll get back up.

This makes every fight feel important, and forces you to actively watch them rather than just tune out and wait for the next bit of dialogue to tune back in. And that’s just strictly talking about the prototypical Daredevil fight scene, The Punisher’s is an entirely different, yet still completely awe-inspiring animal; while Daredevil flips through the air and performs complex martial arts moves with both his hands and close-quarter weapons, The Punisher just annihilates everyone in his path and leaving a total bloodbath in his wake. One scene in particular towards the end of the season (in the cell block) will have you reeling with every single blow, and although the fear of vulnerability that comes with every Daredevil fight doesn’t really transfer to The Punisher’s, you find yourself not really caring because every fight with him turns into a massacre that you just can’t look away from. 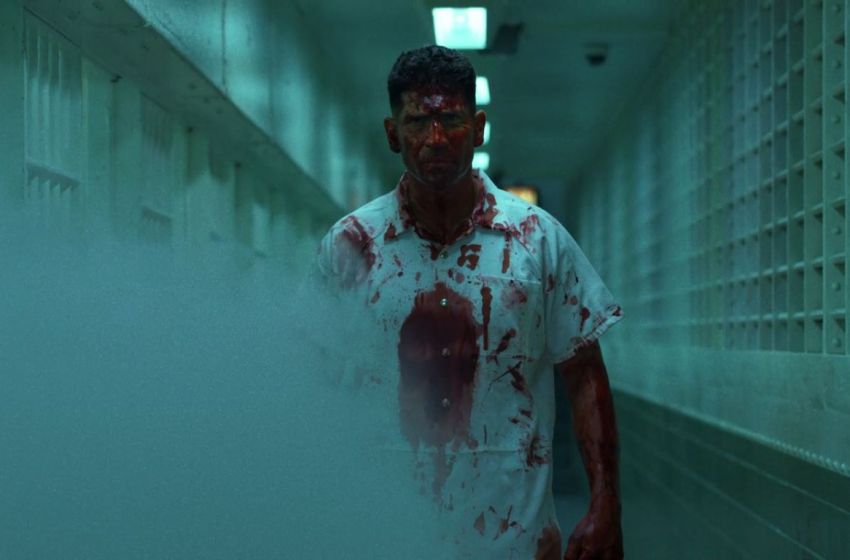 FUCK WITH ME NOW RICK

Speaking of The Punisher, the fact that there really is no “big bad” like Kingpin is almost completely made up for by how well they handle the introduction of Frank Castle; I must admit, towards the middle of the season I was a bit frustrated that they diminished him into a stand-in for the “vigilante/thug” theme they had going, but he comes back with an absolute vengeance. I talk a lot about how much fun it is to watch him wreak havoc, but there’s almost an equal amount of attention placed on the moments that Frank isn’t ripping drug dealers’ guts out.

A lot of thought has been put into properly conveying his motivations, backstory, and the nature of his never-ending ‘crusade’. It’s on par with how much they dug into Kingpin in the first season. By the end of the season, we’re painted a full portrait of Frank Castle that’s equal parts damning and redemptive, and the fact that he doesn’t have his own show is blasphemy. What really makes Jon Bernthal’s performance stand out, at least in my eyes, is that he doesn’t stop acting when he’s fighting; he doesn’t just become a mindless killing machine going through the motions the second a bullet leaves the barrel. He stays in character and blurs the line between blood-thirst and regret with his just facial expressions. The only problem I found with the way they handled the character is the fact that his storyline during the second half of the season really takes a departure from Daredevil’s, which once again attacks the cohesiveness of the season. Then again, the fact that I nearly squeal with glee every time Frank appeared on screen pretty much makes up for that.

Really, I’m a sucker for a show that can host a large array of characters and develop them all semi-equally (I’m looking at you Lost), which is another thing that impressed me about this season; everyone from Foggy to Frank progresses forward in their own ways. Foggy has this thing going where he has to learn how to step out of Matt’s shadow, Karen’s learning how to move on with her life independent of Nelson & Murdock, and I think most people are familiar with the internal struggle that goes on inside of Frank Castle. But special note goes to Elektra, who really has a beautiful redemptive character arc that hammers home something I’ll mention in the next paragraph. None of these developments are really surprising or unexpected, but its good writing nonetheless, and I respect a show that doesn’t forget to pay attention to its menagerie of side characters.

Now, as a native New Yorker I might be a little biased, but I absolutely adore the way the show treats New York City as almost a living being; it influences every character and is the driving force behind their motivations, whether they be good or bad, all the time. As much as I complain about NYC, you can’t help but see that this city shapes you as a person no matter how little or how much time you spend in it; this is true to a certain extent with every city really, but the iconic status of NYC really hammers that point home that you’re not entirely your own person.

How can you be surrounded by so much life and culture and not be changed at least a little bit? You’re shaped by what surrounds you, just like Elektra was shaped by Stick and the Hand, Matt was shaped by Hell’s Kitchen, and Frank was molded by tragedy both abroad and home. The question that we’re left with is, do we let that define us? Do we let ourselves give in to the influences of our environment or do we fight back and become our own people, undoubtedly changed at least in some part by our surroundings but ultimately defined by our own goals and aspirations? Ultimately, that theme is the complement to the standard “vigilante/thug” scenario we’re presented with in the second season, and the combination of the two really does make something novel and engaging. New York City is such a diverse powerhouse of personality and vigor that it’s almost impossible not to write it as a living, breathing character, and Daredevil‘s commitment to that decision is one I wholeheartedly respect.

I guess my review is colored by the fact that since the Marvel films have the most vanilla, bland villains of all time, I generally look to their television shows for a breath of fresh air, so it’s all the more depressing when I’m disappointed on that end too. However, even if Daredevil didn’t manage to develop a convincing villain this season, its ability to delve into new characters that really toe the moral line is a close second.

Enough out of me, what did you guys think about the newest season? Be sure to leave your thoughts in the comments section below.