When From Software released Bloodborne on March 24th, 2015, exactly one year ago at the time of this writing, it was well received by both critics and fans alike. Building upon the foundation of the Dark Souls series, the game offered a faster paced and more aggressive combat system that rewarded tenacious players willing to risk it all for that last decisive hit. Built around it is an equally robust and fully realized world, filled with gothic inspired environments teetering on the edge of sanity and packed with richly detailed lore. This ensured that Bloodborne was the first must-have exclusive for the Playstation 4 and still remains one of the best titles in the console’s library, with a recently released downloadable expansion, entitled The Old Hunters, adding even more content to the game.

Despite these accolades the general consensus of the Souls games, in addition to Bloodborne, are that they’re wickedly hard and punish the players with an overwhelming gauntlet of enemies and traps. While the marketing campaigns for the franchise definitely emphasize their hardcore nature upfront, this perception is ultimately misleading and hurts the overall appeal.

The Souls games harken to a more old-school style of design, using the game itself to teach the player the mechanics and gameplay systems. It ensures that it’s almost impossible to fake an understanding of the game and continue to progress. Lead designer and recently elected company president, Hidetaka Miyazaki, is known for subverting expectation with every new area. He keeps players attentive to their environment, almost challenging them to stray from their strategies and be reactionary- resulting in an often perilous turn.

The game’s storytelling is similarly designed, with the possibility of missing entire side-quests and optional areas by only skimming the surface. Surprisingly enough, none of this impacts the overall experience. Bloodborne, and the other Souls games, encourage you to tumble down the rabbit hole at your leisure. The intricate lore is there to be uncovered but it’s never in your face or a necessary part of understanding the immediate objective. This level craftsmanship is what From Software is known for, and it’s what has kept fans coming back for each installment. It’s a drug, the kind players have chased since the days of Donkey Kong.

Here the highs are incredibly high and the lows remind players that they can and will do better next time. This comes most notably in the form of a string of heart pounding boss encounters that make up one of the series’ largest draws. Each boss is uniquely designed and often horrifying in both scale and appearance. They attack with confidence, true masters of their domain, unafraid of petty opponents such as yourself. You will die, this is just a reality. But early on both Bloodborne and the Souls games teach you that death is not the end, in fact it’s a vital tool. Death is a learning mechanism, it allows you to track attack patterns and understand your enemy. The thrill of the boss fights is exactly that, a cycle of learning and then using that knowledge as a means of victory. It’s a sort of satisfaction rarely found in modern gaming, and that’s why it’s a shame that the series is billed as “too hardcore”. There is an audience for these games, and one I suspect is far larger than those currently playing. 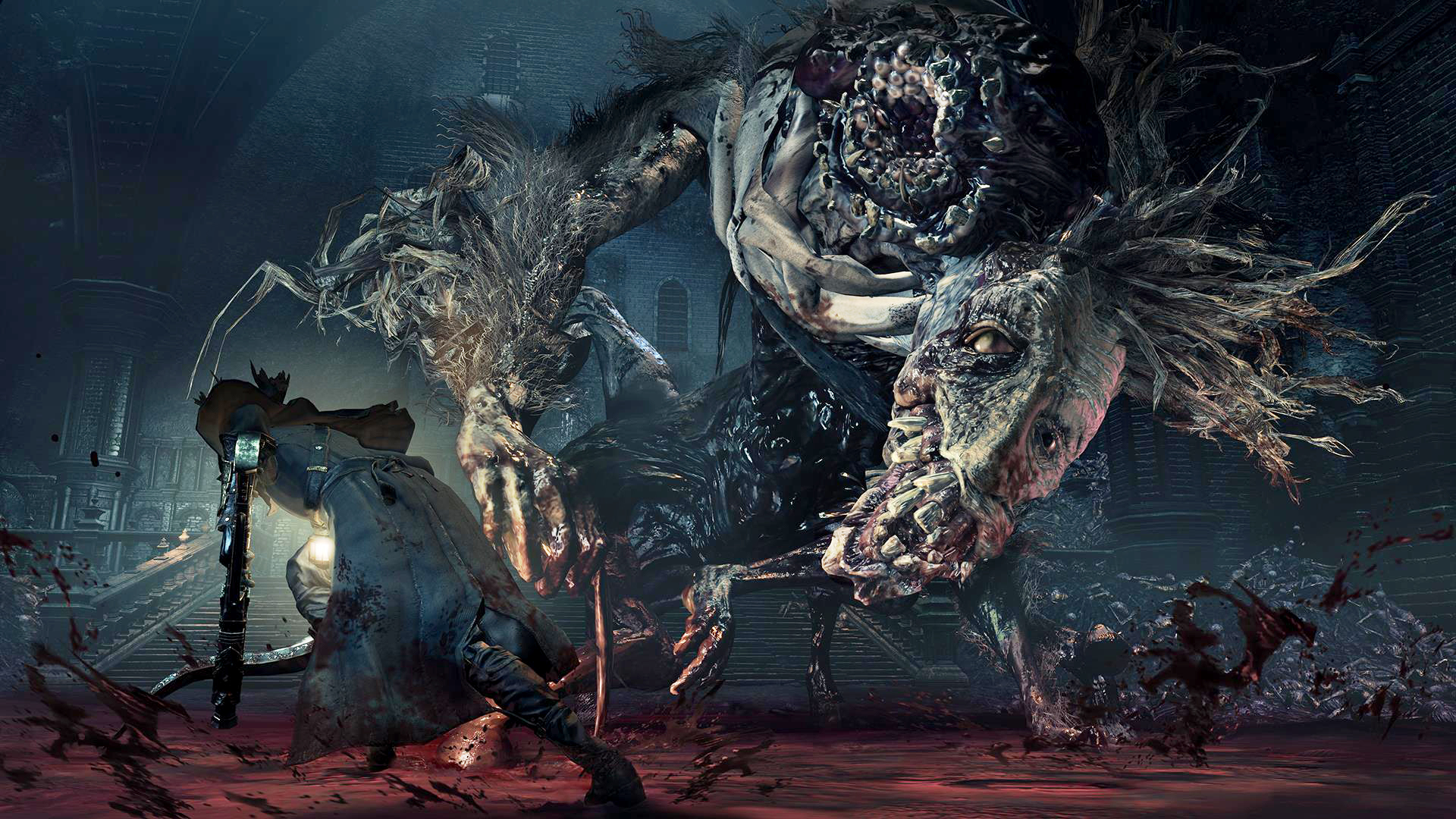 Continuing the annual release schedule started with Dark Souls 2 in 2014, the release of the third and final game in the Souls trilogy is upon us, with fans gobbling up any and all information before the game hits on April 12th. However, rumors have been circulating that Dark Souls 3, will mark the end of the Souls franchise as we know it.

Hidetaka Miyazaki has voiced concerns that the continuation of the Dark Souls and Bloodborne games will affect the quality of the products delivered, much in the way that the Call of Duty series churns out the same product year after year. In an interview with Gamespot, Miyazaki stated, “It’d be a lie if I said I have no concerns about that, I don’t think it’d be the right choice to continue indefinitely creating Souls and Bloodborne games. I’m considering Dark Souls 3 to be the big closure on the series.”

For fans of the Souls and Bloodborne series, the news is bittersweet.  It seems that Miyazaki wishes to usher From Software into a new creative direction and create his own legacy rather than riding the wave of success from his predecessors. He continued, saying, “I believe that From Software has to create new things. There will be new types of games coming from us, and Dark Souls 3 is an important marker in the evolution of From Software… I just believe that [moving on] is necessary in order for players to continue enjoying our games. We have to keep creating quality games and be aggressive about doing new things.”

While Miyazaki’s outlook is understandable, there is a reason why these games are so popular.  It’s because they are absolutely phenomenal and have a rabid fan-base to support such a claim. From Software has spent years world-building, creating these fantastic environments and stories that age with intrigue and constant revelation. Few games encourage players to glean plot details from the environment, bosses, and NPCs around them, catering to the explorer inside all of us. Unfortunately this news also comes at a time when the industry is saturated with titles that hold the player’s hand through for their entire duration or offer little to no replay value.

It’s unrealistic to expect From Software to keep producing games based on the Souls series, but the template is far from becoming stale. Each game has done something different with the formula, further highlighting just how brilliant the men and women designing this game are. While we won’t know what the future holds, hopefully From doesn’t entirely abandon their origins. And whatever their next project is, the devout will show up to support it.

Below we briefly ponder the series and what comes next.

Tim Mulpeter: I remember my first time playing through Bloodborne thinking I was simply assuming the role of a hunter, a pawn sent to cleanse the cobbled streets of Yarnham from the beastly scourge afflicting the township. Oh how wrong I was! As the game progressed I was amazed by the carefully paced reveals meant to cast doubt on my previous accomplishments. An entire township cursed by ancient blood during its quest for intellectual transcendence?  I simply needed to know more about what had taken place.  I found myself staying up into the wee hours of the morning, watching videos on the lore of Bloodborne and being fully captivated by its rich detail. And I wasn’t the only one, there are hundreds of videos, posts and wikis generated by those looking to dig deeper into the game. This is that kind of experience.

Max Cornillon:  Bloodborne was my first time playing a Souls game. I think at one point I was having dreams about completing certain sections of the game, as if I was trying to convince myself that I was on the precipice of a solution. It’s maddening, but it’s the kind of madness that’s all too fun to let in. I can’t remember a game like it, which makes me even more excited for Dark Souls 3.

Tim: I’m equally excited, although I can’t help but feel that discontinuing the Souls and Bloodborne games would be a major mistake, like pulling a plant from the soil that nurtures it. I desperately need more of these games in my life and I don’t think I’m alone in that sentiment.  At the very least I would love to see the release of a Bloodborne 2, in all of its gory, brutal and unforgiving glory.

Max: You’re definitely not alone. You actually introduced me to the series, and pushed for me to pick up Bloodborne when it came out, despite the fact that I was completely unprepared. Now I’m hooked, and not ready to say goodbye. Bring on Bloodborne 2….please?

Tim: I am confident that whatever From Software develops next will live up to the high standards of quality, gameplay and storytelling that fans have come to expect from them.  In the meantime, I certainly look forward to getting my hands on Dark Souls 3. Check back next weekend for a full review.

There you have it, Tim’s review will be up next weekend. In the meantime you can let us know what you think of the series in the comments below.